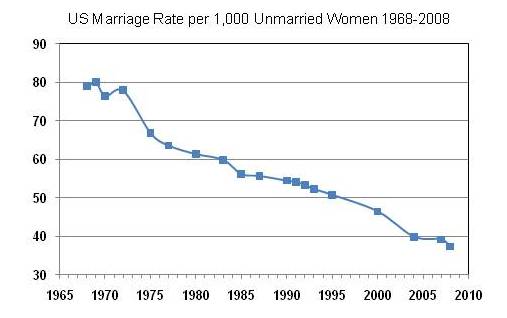 Between 2000 and 2010, I vividly remember that at the end of their career, sex workers married a man who agreed to financially support this woman for the rest of his life. It was really common. The scheme was always the same. Usually, a woman worked as a sex worker until her thirties, and then she became a housewife. The man worked as hard as he could to provide a great lifestyle to her.

Now, I can see that many women among those former sex workers are single today (divorced or never married). Even if they still have a large fan base, no man accepts to commit to such a woman.

I observed the same issue with women who had an unstable life. I think about female singers, actresses, dancers, models. Once they hit the wall, and their income, men today aren’t interested anymore.

In general, men don’t want to financially support a woman for the rest of their life anymore.

I declare the era of the trophy wife officially over

The marriage rate in the USA tremendously dropped between 1990 and 2008. Taking into account that women earn less money than men on average, it means that men don’t want to financially support a wife and be exposed of paying alimony.

Men rose their expectations when they look for a woman. They now expect their women to have a stable job. If they meet a nice girl, it is just not enough.

This phenomenon is really difficult to prove. However, I noticed the following phenomenon in my entourage. In the 90s, there were many marriages in my country, France. Today, I still know lots of people here but men refuse to marry their female companion. They use an alternative agreement to marriage called PACS, or they don’t marry at all. The PACS is like a prenup. There is no community property under this agreement. Everyone keeps its assets. Unlike the prenup, they can divorce for free in 24 hours and there is no alimony.

In the light of this phenomenon, I think there is an over-representation of married men in the mainstream media. It is just a pure propaganda to encourage those who aren’t married to come back to the plantation.

Today, media and movies discuss marriage as much as in the 90s. However, there are much less marriage today than in the 90s. So, to me, it is a propaganda because marriage is a much smaller thing than it was before. US Movie plots should tell stories of people who aren’t married but who live together. They don’t.

The “matrix” pretends that every man wishes to marry a woman and financially support a woman. It is just a big lie.