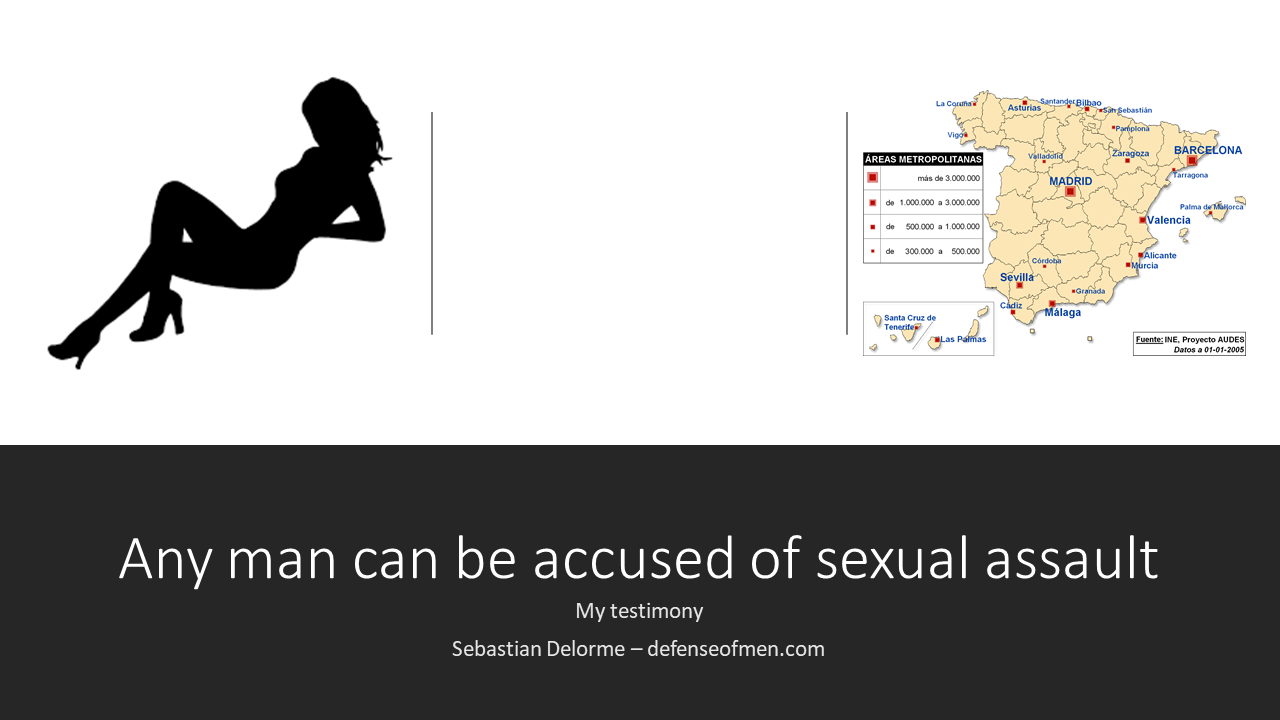 Any men can be falsely accused of a sexual assault and I am here to testify. Some years ago, I lived in Madrid, Spain. I met once an Italian woman on match.com, a dating website. We first met at the Madrid train station. Then, she invited me for a week-end in Valencia where she lived. I took the train and arrived on a Friday at 12h00 in Valencia. She directly drove me to the beach. I don’t know how it started, but we started to kiss each other at the beach. We picnicked. Then, we went back to her car and we French kissed. As you can see, it was a real intense flirt. Around 14h00, She guided me through the streets of Valencia and discovered its beautiful places.

At some point, I left her to check in at the NH hotel where I booked a room. I had a new appointment with her in the late afternoon. We met in the city Centre. She didn’t know which restaurant to pick. I picked a restaurant and I paid the bill. I did it because I didn’t want to face the situation where someone should ask “who does pay the bill?” I remember now that she didn’t thank me for the dinner.

Then, we went to a lounge bar. We walked in the warm night of Spain. People were friendly. Temperature was perfect. In the end, we went to my hotel room. In the hotel room, We kissed each other in the same fashion as at the beach. I didn’t jump on her. I was tactful. At some point, she stopped kissing, she said “it is too fast.” I held her for 1 or 2 minutes. Then, she escaped and slammed the door.

I was stunned and I didn’t know what to do. Her behavior didn’t relate to anything I saw during the day. As you heard before, we didn’t stop kissing all day long.

So, I went sleeping. The day after, she drove me to the airport of Valencia. She told me that she experienced the day before “an assault”. She implied that I harassed her in the hotel room. As I heard the word ”assault”, my heart missed a beat. I understood I was in front of a psychologically twisted female predator. I went through the security gate and I felt so relief since she could not follow me to the waiting room. If she was on her period, pretending that I assaulted her would have been unnecessary.

I never saw her again. I decided that I would not talk to her anymore. I didn’t want to put myself in danger. I find that her behavior was unacceptable. Also, I didn’t want to listen to her.

So, before this story, when I saw stories of rape accusations on the TV, I didn’t listen to it. Now, I understand that any men can be falsely accused of rape and sexual assault. This story helped me to be open-minded as well. I understood that everywhere all over the world, there are men who are falsely accused of rape, sexual harassment and sexual assault.

The mainstream media manipulate people.  They choose the worst suspicious-looking mugshot of a man. They add some text to it that implies that a man is guilty even before being judged. The journalists write as if the man was guilty. In this case, the media tries to be a substitute for the justice system. People should not be mistaken. Even if the justice system is not perfect, a court order is the result of investigations.

By the way, I always have been very respectful with women.  I understood that with female predators, you can be a nice man, you can treat women respectfully, it does not change anything. Those female predators will try to harm you anyway. They have a psychological disease. These see a normal heterosexual practice as a sexual assault.